The Boss GT-1000 is a guitar effects processor and the kitchen sink, all thrown into one! But that would just be scratching the surface. Containing banks of overdrives, distortions, delays, modulators and reverbs, as well as cool effects like Slicer, Slow Gear and others, the GT-1000 offers a wealth of knowledge, experience and intelligence to give the end user, the perfect sound anytime, anyplace, anywhere, whether that be through a monster backline, or straight into the desk and back through the monitors. There are a multitude of guitar amp models and configuration possibilities that take into account the diverse needs of modern guitarists.

The possibilities are endless with the GT-1000. Boss’s own AIRD (Augmented Impulse Response Dynamics) technology, which is supported by 32-bit AD/DA, 32-bit floating-point processing and a 96 kHz sampling rate, (easier said than understood!) means that the amps and effects respond to picking dynamics and guitar volume adjustments as smoothly as any of its predecessors or competitors. Every possible genre is covered and I was able to dial in sounds for Blues, country, rock, jazz and metal with very pleasing results.

The amp simulator section is extensive, offering small combo, through boutique and supreme drivers for chiming cleans and crunchy mid range overdrives, and on to Juggernaut (my favorite) monster power drive distortion and beyond. Alternatively, go directly into Ableton Live via USB. You can adjust the GT-1000 to sound optimal through an amp’s effect return, a power amp driving guitar speakers, a full-range monitoring system and other configurations. Literally anything is possible!

Other options include routing different amp configs to different outputs, in order to tweak each one for its end sound. For example, you can send just the effects to a guitar amp input, allowing you to choose your own base channel, as it were, and then send the desired GT amp to the F.O.H.

One thing’s for sure, you will not get bored of the GT-1000. If you are the type of guitarist who loves presets or wants some inspiration look no further. Not only is the GT-1000 packed with presets, you can also download additional patches via the ToneCentral collections of classic rock song tones to presets created by artists such as Steve Lukather & Marty Friedman there is already an impressive collection of free content here that Boss intend to add to going forward (never mind the presets being shared by users via forums).

The DSP makes patch switching super-fast. So the limitless effects recipes of choice, blend seamlessly into one another. For me, that is crucial. There is nothing worse than “Noticing” a glitchy patch change, when you’re in mid flow!

By default, the main footswitches are assigned to select patches, patch banks and three control assignments, but you can reassign them to control other functions, including tap tempo, parameter adjustment and more, in either latching or momentary modes. 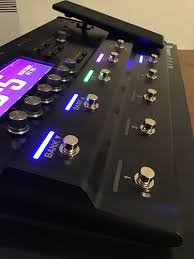 Drawbacks……well, the GT-1000’s LCD panel is not easy to negotiate. The reason appears to be that in order to “never run out of DSP, Boss has opted to not allow you to add or delete effects blocks. All the available blocks are visible at all times.” (quote Boss.com.) But there is so much information to process. So, editing your banks and sounds requires a lot of scrolling back and fore to get the job done. It really all depends on how far you want to go to get your “perfect” sound. You could feel that some options are limited, but personally, there is way more than enough available to give you unlimited greatness.  Anybody who’s used multi effects processors in the past, will be used to the “scrolling” woes. You can’t have it all I suppose. Afterall, if the screen was big enough, then the whole unit would be TOO big!

So, to sum up………… Plugging in, switching on and creating some awesome patches of various styles and genres happened pretty quickly. It’s very difficult not to be pleased with how this unit sounds in any application. BUT, if you want to explore in depth, including making use of the looper section, then it will take more time. But isn’t that part of the journey? The GT-1000 is a very robust, lightweight little tank, fitting perfectly into your rucksack, along with your leads and “fast Fret”. It’s a super full stack backline and monitor ready answer to any “on the road” gigging musician, or stay at home axeman, without making a mess of your bedroom floor. No need for a daisy chain of pedals and patch leads anymore. At the price, you must look at it as a great “Investment”.