Allen & Heath has its work cut, if it wants to compete with the likes of the Behringer X32, Presonus Live 32 and the Yamaha MG20XU. This is their answer to that question. The Qu-16 live mixer is a scaled down version of the industry leading GLD and iLive series.

The desk itself features 17 moving sliders/faders which carry out the duties of level control and on-board graphics EQ’s, to name just 2. The compact feel does not deter from its usability at live FOH sound control at small to medium venues for the working musician. 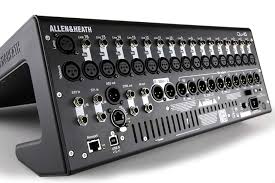 Input options are as follows:

The effects options are all on-board, so there is no need for ext. FX loops or inserts. There are 4 choices for this, sharing aux busses and insert effects.

The outputs on the QU-16 are plentiful, with four mono and three stereo mix outputs for independent monitor feeds as well as a main output for the FOH. (Front of house). There is also the very cool “D-Snake” output at the back for expanding to personal monitors and remote connections. So this little beauty could be the tip of your live sound Iceberg.

Compressors, gates, high pass filter and four-band parametric EQ are present at every input stage, with the additional compressor and graphic EQ available at the output stage. 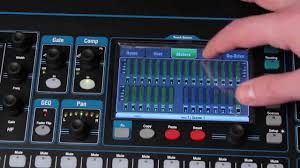 The touchscreen responds beautifully and the menu layout and execution is very easy to pick up. Combining that with the traditional “Old school” analogue fader feel and it’s a great combination to work with. Further to that, the remote mixing capability is a welcome addition. The IPad app is called “Qu-Pad” (see what they did there!) lets you wirelessly adjust the monitors on stage, roam around the venue while tweaking the PA, and then mix the show from wherever you want………….if you just fancy mingling!

For conference and business presentation applications, the Automatic Microphone Mixer (AMM) helps you manage the levels of multiple inputs, ensuring that each speaker’s contribution is heard, but with priority settings to establish an order of precedence.

If you have any experience, however small, of operating mixing consoles, either new or old, then you will very soon master this machine. With mix buttons responding at the speed of light, performing the magic of moving faders in a heartbeat, to your chosen settings, while being able to easily keep track of the FX engine and monitoring its movements as per the demands of the audio environment.

The fact that there is no option for external effects, the on board library is extensive. The four processors have plenty of choice, so you’d have to be extremely fussy to not find everything you would need at all manner of events.

Here’s the icing on the cake!!

The QU-16 multi-track recording capability is awesome! You can record all 26 inputs and the stereo output to the on board disk, which can then be exported to your pc software later. Or if you like, you can connect the laptop directly too.

So to sum up……. Allen & Heath have pulled this gorgeous compact desk out of the bag and shoved it right in the face of its competitors. It has all the features you would have wished for but without breaking the bank. For me, the remote mixing and multi track recording facilities made my day! A & H have not disappointed with their level of build and audio quality. If there was anything downside, then I would say that the group mixing options were missed, and your memory needs to be good, because you can’t name your channels. But you can always go “Old School” and bring the masking tape.